President, Mr. Agrawal was a part of ‘Virtual WAKO Ordinary General Assembly’ on 13th December 2020 where all other top officials and leaders from across the WAKO World were present for the annual discussion. Apart from this, Mr. Santosh K. Agrawal and other members of WAKO India were a part of WAKO Ring Sport Referee Seminar and WAKO Tatami Sport Referee Seminar respectively which was organized by WAKO International Federation. It was a special virtual event where officials were brought to train on the new and updated rules. Special thanks were given to WAKO President, Mr Roy Baker for his continuous dedicated efforts in developing the Kickboxing Sport across the world. Also vote of thanks was paid to Mr Yury Lakhtikov, Chairman -Referee Committee Ring Sports WAKO, Mr. Brian Beck, Chairman-Referee Committee Tatami Sports WAKO, Mr Romeo Desa Chairman – Technical Committee WAKO, Mr Sami Savo Chief Referee WAKO for their support. The updated regulations are more powerful and effective for the growth of our Kickboxing. December was accomplished as yet another successful month for the group with some extraordinary effort in uplifting the standard of the game and redefining Kickboxing sport in India. Last but not the least; President Mr. Agrawal has wished the WAKO Family a Merry Christmas and a very Happy New Year to one and all. He was very positive and believes the coming year will bring loads of new progress for everyone.
PR — WAKO India 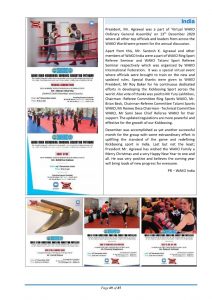 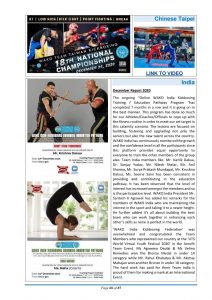